NSM is released through a set of helm charts, which are easily deployable in your Kubernetes cluster:

NOTE: NSM v0.2.0 was released against Helm 2, other version have not been tested.

There are also Examples that illustrate the usage of NSM in more complex scenarios.

NSM is extremely insensitive to changes in Kubernetes, and as such is generally expected to work with post 1.11 versions of Kubernetes without issue.

NSM v0.2.0 has been successfully integration tested with Kubernetes versions: 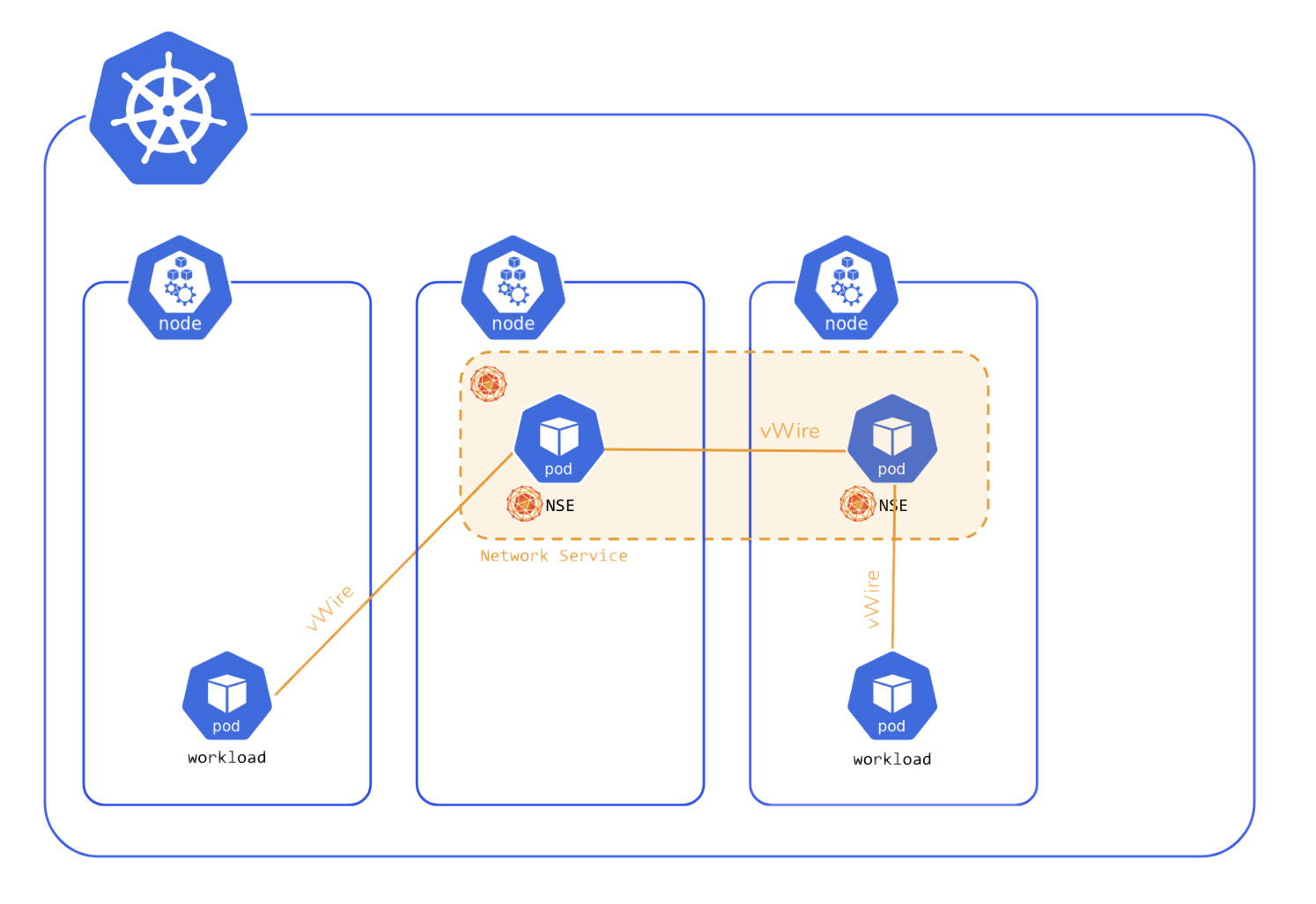 With the introduction of interdomain, an NSE in one cluster may register with any “Network Service Registry Domain” including one in a different cluster or even a ‘floating’ domain not associated with any cluster.

Likewise, a Pod can connect to a Network Service that is registered in a different domain. The introduction of interdomain fulfills the Network Service Mesh promise of decoupling ‘where’ a Pod is running from what Network Services it may consume.

Consumption is straightforward and by name, with an interdomain Network Service specifiable as:

When a Pod connects to a Network Service, a vWire is plugged into that Pod,typically in the form of an additional interface, with non-conflicting-with-the-cluster routes indicating what traffic should go to the Network Service. 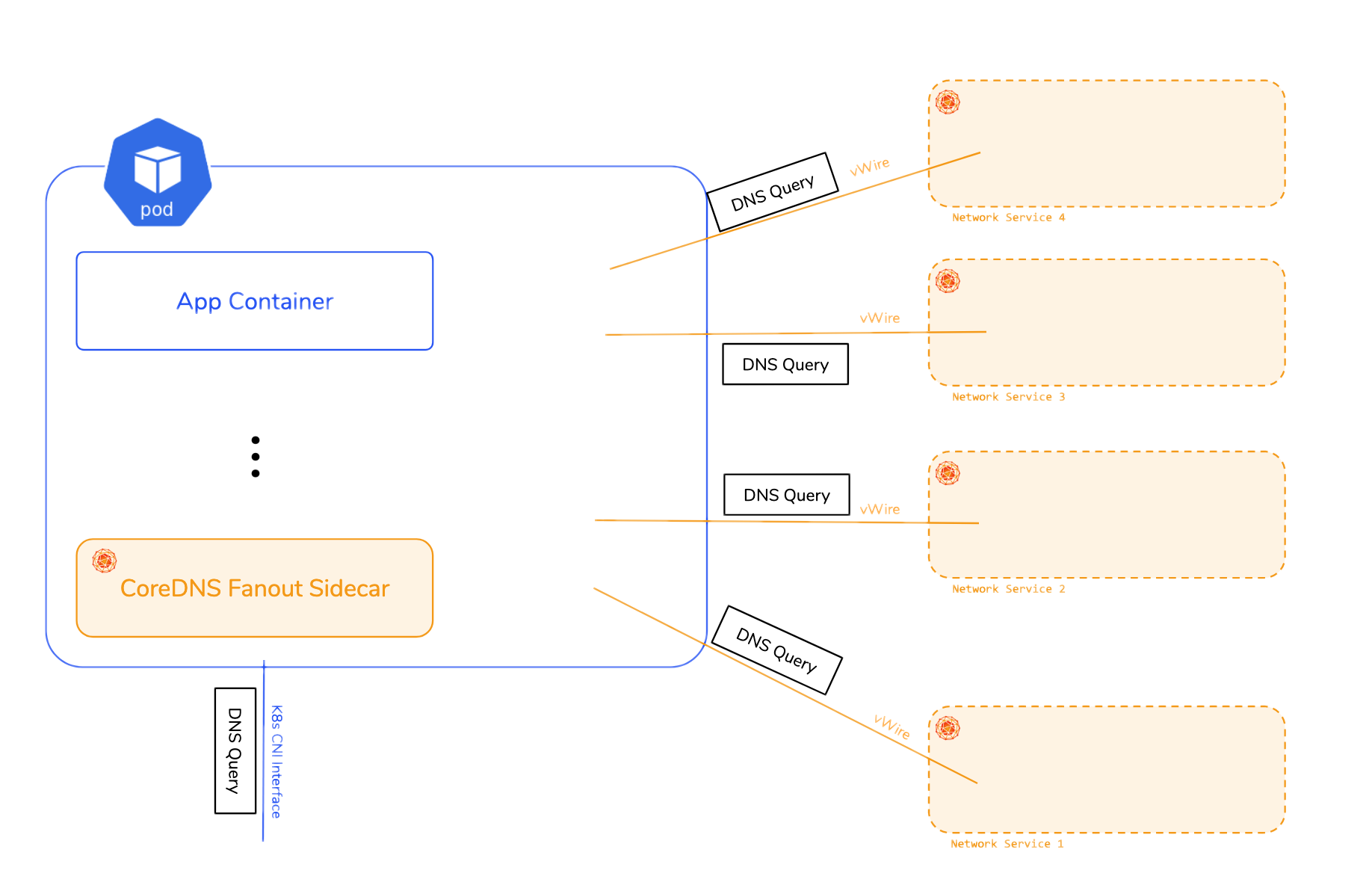 In this way DNS that is private (not available on the public internet)can be provided for a Network Service without disturbing the normal DNS resolution within the cluster.

Version 0.2.0 supports Spiffe/Spire support for workload identities, paving the way for sophisticated policies governing admission of a Pod or workload to a Network Service.

Most of our focus has been on Application Developers and Operators, but NSE Developers are also important to the growth of the NSM ecosystem. Several improvements have been made to make it easier to write NSEs.

The number and complexity of APIs needed for development is a key factor to the cognitive load involved in successful development. Network Service Mesh strives to keep it’s APIs simple and small in number.

Network Service Mesh previously had two APIs for requesting, closing, and monitoring a connection from a Client to and Endpoint, one for local mechanisms like kernel interface, memif, etc and one for remote mechanisms like vxlan, srv6, gre, etc. These two APIs were almost semantically identical, but for the local/remote mechanism split.
These were simplified down to a single API.

Shift to a chain oriented sdk

Keeping APIs simple and few is key to rapid development. A Network Service Endpoint (NSE) has to supply a very small number of simple GRPC APIs to the outside world to function, but may have to carry out a number of internal activities to meet those requests.

The Network Service Mesh SDK for writing NSEs was adapted to allow the ‘chaining’ together of a list of implementations of those APIs which receive an incoming call, do their piece of the work, and then make an outgoing call to exactly the same API. This allows small bits of functionality to be written as ‘chain elements’ and then reused to construct a wide array of NSEs. An NSE author may only need to write a few ‘chain elements’ to do work that has not been done before and reuse existing chain elements to build out their NSE.

As part of the shift to chain a chain oriented SDK, the option to allow jaeger tracing through those internal chain elements was added, allowing for much more detailed tracing not only between separate components, but within those components.

Examples factored out into examples/ repo

Network Service Mesh’s ‘example’ NSEs where factored out of the main repo and into an examples repo to allow for easier consumption and contribution.

It is extremely persistent, working around a number of small instabilities in various clouds abilities to reliably provide new clusters on demand. This has allowed a vast expansion of testing.